No matter what level of ball, baseball or softball, the best swing is slightly up, or in another view, level to pitch. Mathematically, it provides the hitter with the greatest chance of making solid contact. This famous graphic is from Ted Williams’ The Science Of Hitting. 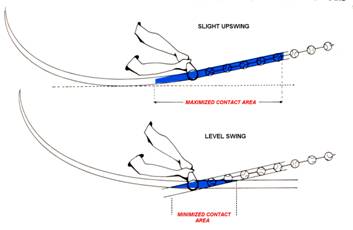 Bryce Harper: “If you look at the best swings in baseball, it’s through the baseball as long as you can.”

J.D. Martinez: “I used to always think ‘hit down on the baseball’ and after studying everyone’s swings, I changed that, because that’s not what other people are doing. They’re doing what feels like an uppercut.” …

Brandon Moss: “Don’t chop wood. Terrible. It’s a short swing, but it’s a swing that takes absolute perfect timing. You have to be so precise. If you don’t hit it right, you clip it. It’s on the ground, or it’s a foul out, or it’s a backspun fly ball which goes nowhere. Match your shoulders and your hips with the barrel of the bat.”

Some people suggest that first move with the hands is down. Is this really teaching what we see? In addition to the one posted above, take a look at the examples below. It’s hard to argue with the success these two hitters have had in their prime. Notice hips go first. Hands stay with the back shoulder while the back elbow comes down.

Look at what is going on with the hands from the behind home plate view. Notice how both elbows change as the back elbow comes down. The hands work the barrel to flatten early and stay with back shoulder for a bit. This allows top level hitters to attach their swing to powerful rotational energy.

And the greatest hitter of all time…

This is Ted Williams. The most famous player to wear the number 9. This is from a video he made in 1966 and shows how the hands/elbows work the bat to take the barrel to the ball on a slight upswing.